Novice Teachers Need More From Us 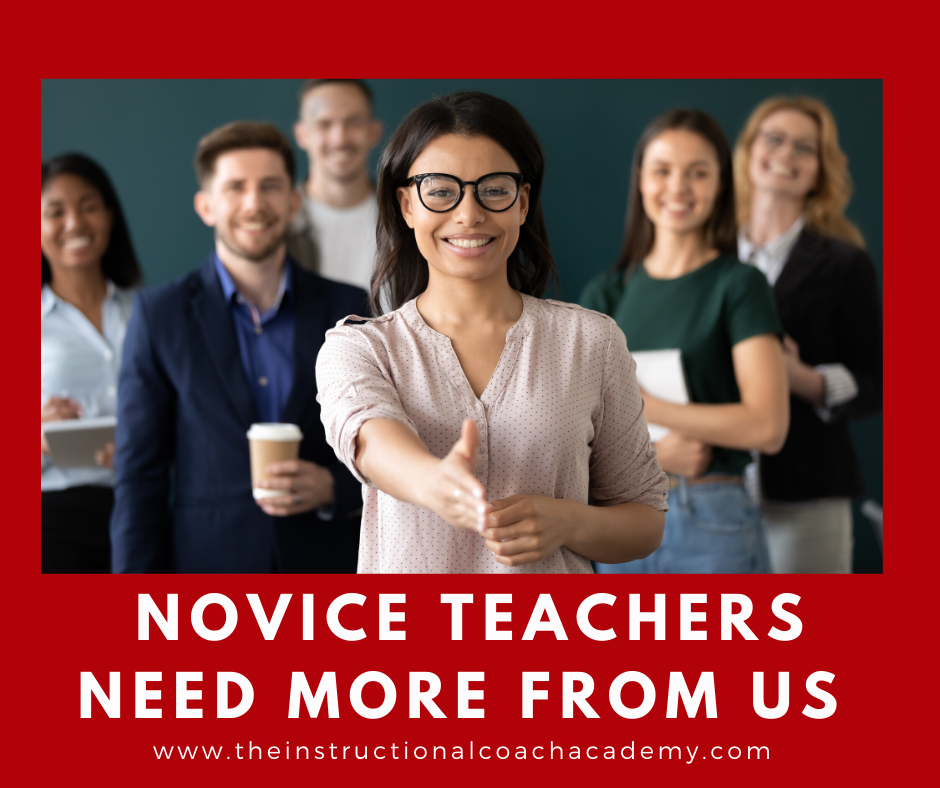 I walked into Mrs. Smith’s second-grade class for our coaching session excited to refine her small group instruction techniques. We met that morning during her prep time, discussed data, and planned a flawless small group lesson for a group of English Learners working on short vowel sounds for me to model. She knew where she was falling short in her instruction and asked for help figuring out how to make the lessons work for her students. I knocked on the locked classroom door. I watched through the narrow window as a student sprinted across the room and leaped over a desk to be the first to open the door. What I encountered was pure pandemonium.

What I encountered was pure pandemonium.

Juan hadn’t had his ADHD medication in a week because mom had run out, and there wasn’t more until the end of the month. He had flipped over a desk and was now crying because he didn’t mean to and wasn’t sure how to control his hands and feet.

Audrey had taken a toy from another student who was crying hysterically, begging for its return.

Jace just wanted to read his graphic novel in peace, but the deafening roar in the classroom made that impossible, so he had laid his head inside the open book on his desk.

Axel was coloring on the desk that Jace was resting on.

Yadrielys, the new student from Puerto Rico was sitting with her hands folded on her desk, waiting for a direction that she understood.

Jose was bent over, head on his desk because he was hungry. He had gotten to school too late to eat the school-provided breakfast, and the staff at the school had been told that snack time wasn’t permitted because it took away from instructional time.

Mrs. Smith was attending to Andre, her non-verbal autistic student rocking in the corner. His paraprofessional had quit the week before, and with the district shortage, it may be another month before a replacement was found.

I walked over, placed my hand on her shoulder, “I leave here every day feeling like a complete failure,” She sighs, tears in her eyes.

As a Literacy Facilitator in a bilingual school, in an urban district, I have coached many new teachers. What have I learned? We need to do a better job of supporting novice teachers.

Mrs. Smith was hired 2 days before new teacher orientation. She was oriented in two days, spent another two in full-day professional development sessions, and spent the weekend preparing her classroom as best she could despite the peeling, cuss word-graffitied walls. The students showed up on Monday morning. Mrs. Smith, like so many other new teachers, is hungry to refine her pedagogy. She is coachable, she is invested in her students, and she is flailing in the chaos. Sure, she needs instructional coaches like me and our very qualified STEM coach. Sure, she needs data team meetings, and staff meetings to become acquainted with the routines and processes of the school. Perhaps, though, all of that could wait a bit?

What she really needs is someone to guide her through those first, ever-important first weeks of school. The weeks where relationships are built and classroom communities develop. She needs to learn how to set up her space so that it works well. She could also use some money to purchase supplies for that space, rather than use her meager savings to tackle it on her own. She needs to know how to set and enforce classroom procedures so that she doesn’t spend an hour putting the classroom back together after school each day. She needed time before the school year started dedicated to preparing for the young people she cares so much about.

So, on that Tuesday, I set our flawless lesson plan aside, I reigned her class in, sent her to the bathroom, and to grab a snack since she had used her lunch period to level the books for her classroom lobby. I read a story to a group of 8 year-olds who sat (mostly) criss-cross-applesauce on the rug. I gave her a moment to breathe.

Then, the next morning we set about arranging her furniture and creating routines and classroom jobs. I may be a Literacy Facilitator, but that’s not what she needed at the moment. If we don’t develop structure and routine first, no one will learn how to read this year. We’ll get to that small group lesson another time.

Maria Chapman is a Literacy Facilitator and freelance writer. Her work is featured on Medium, BizCatalyst360, Baby Gaga, Rooted in Rights. She lives in Connecticut where she enjoys time with her husband and their five children. You can find out more about her work at mariafchapman.com and on Linktree.